Mel’s story. In her own words.

Hello, I’m Mel. I’m 27 years old and I’m originally from Fleetwood (near Blackpool). I moved out when I was 18 to live in Barnsley with my then-boyfriend, for a short while, before I started university at (formerly known as) Leeds Metropolitan University studying Film & Television Production.  Uni didn’t really go well for me, due to admin errors; I didn’t get to do the specialisms that I wanted to do, asides from screenwriting which I aced, but everything else; I failed.

I thought that I was able to retake the year, but you have to score at least 40% on the year, and I didn’t even hit that. I wasn’t even notified about this until the opportunity to appeal had been closed. 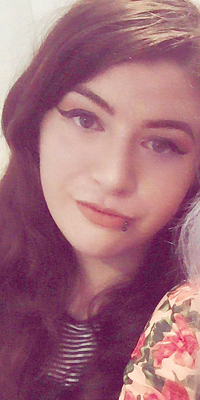 Ever since then, I had been mostly unemployed and if I ever did gain employment it was always something unstable like temporary contracts and 0-hour contracts. It felt like there was no end to it, and I wasn’t ever going to end up achieving anything, any confidence I had in myself was long gone.

I wanted to go to university again because I felt like education was an option where I couldn’t find employment, but all the UCAS point requirements had gone up and tuition fees had tripled since I went. So I gave up on that idea, as I felt like it wasn’t worth the debt to study something that had little career opportunities at the end.

In 2015, my good friend Kelly had signed me up to some “random” programme for unemployed young people to get back on track and into work. I just thought “meh it’ll be like one of those job centre courses” and wasn’t all keen on going, but I went anyway because Kelly was insistent on me going and wouldn’t shut up ha-ha!

It’s a good job I did give in because I probably wouldn’t be where I am today if I didn’t. It turned out this “random” programme was Talent Match. Sessions involved various topics including employability skills, enterprise skills, well-being, budgeting and saving money, healthy eating, etc. As well as all this, I did gain some new friends who I still talk to now. It’s something good to put on your CV as it shows employers that even though you’re unemployed, you’re still actively doing something to increase your chances of becoming employed. We also got opportunities to earn some extra qualifications too!

One day, on one of the cooking sessions; our key worker; Ann, was reading out some job advertisements, and mentioned there was a vacancy, at the organisation she works for, for an apprentice receptionist. I registered my interest, but it was decided that instead of being given the apprentice role; I could start a job creation with them as a Talent Match assistant, which is a six month paid job placement organised by Talent Match.

I got to work with Ann and all my other colleagues for six months, and alongside that I became one of the faces for Talent Match Wakefield and Talent Match West Yorkshire working with the Youth Association. During this time; both roles helped me to develop so many skills and grow as a person. Three years ago; people were scary, I had panic attacks meeting new people, I had panic attacks using the phone, and anxiety stopped me from doing a lot of things. But I managed to jump over that hurdle that I was stuck at ever since I could remember. I’ve co-hosted a conference of 100+ people, I’ve sat and spoken in meetings, I’ve travelled around on my own, etc. All things I never thought I would be able to do, literally because my confidence was that low.

Being an ambassador for Talent Match meant that I was involved, alongside other ambassadors, in shaping the future of Talent Match to further suit young people’s wants and needs. We were also involved with supporting the bid for Talent Match 2.0; to gain more funding so that Talent Match can continue after its current funding contract ends. As an ambassador; we got to attend local and regional meetings with key workers, and representatives from Your Consortium, the Youth Association and the Big Lottery Fund, host yearly conferences, and go on residential trips involving project work and recreational activities.

In 2016 I was promoted to a role within Prospects as an Administrator, during this time I completed an NVQ level 3 in Business & Administration, and as I am writing this I am coming to the end of that chapter in my life. After putting in a lot of hard work, and going through a lot of stress during the application process, I can now say that I am starting a new role within the civil service as an Executive Officer alongside studying 2 level 4 qualifications. Once I’ve completed my 2-year apprenticeship, I will have a permanent place within the civil service.

I never thought that I would get as far as I have, I am really proud of myself, but I wouldn’t have gotten this far without Talent Match, the Youth Association, and all my colleagues at Prospects, so a big thank you goes out to them!

Remember that I was in a bad place for years, I never thought I’d be able to get a stable job, I was afraid of people and socialising, I didn’t believe in myself, and all it took was a persistent friend as a catalyst for all that to change. If you’re in the same place I was a few years ago; remember my story. If I can do it, you can do it too!