With the support of out youth workers, Jessika and Natalia have come on leaps and bounds over the past two years! Natalia is 15 years old, while Jessika is 14. Both are originally from Slovakia and moved to England with their families when they were younger and now live in Doncaster.

When Natalia first started working with us, she wasn’t getting on well in school and had limited aspirations and opportunities. When we first met Jessika she had low self esteem, confidence and was very shy.

“When I first joined TYA I was not aware that expressing my feelings and speaking with confidence was so important. I grew in confidence and started to share my thoughts and wishes with my parents, expressing my ambitions in what I would like to achieve in the future.” (Jessika)

Over the past two years, they have taken part in a variety of projects. One such project involved planning and participating in Hexthorpe Community Awards night, where Jessika won the ‘Young Person of the Year’ Award. 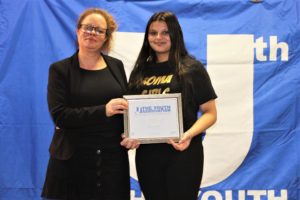 The event was co-hosted by Natalia, who translated English to Romanes and Slovak so that everybody was able to understand what was being said. Both also helped to write an education recommendation report, entitling young Roma people to the same outcome in education as others.

In September 2019, they joined the Young Ambassadors programme at TYA. As ambassadors they have represented The Youth Association, taking part in several workshops, helping to raise money for new projects and community groups, and have attended a range of events. 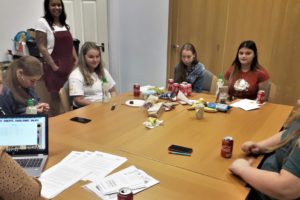 Jessika and Natalia beat off competition from 100s of other young people across the UK, as they were selected to become a part of a core group for the ChildFair State Project – a scheme developed by Children England.

“After finding out that I had being selected to be part of the core group, I was really excited and proud of myself – that I was going to be helping other children and young people but also representing the Roma community and tell others about our story.” (Jessika)

They went on two trips to London to attend the Children of England core group. The girls were both excited and nervous to go to London for the first session, as it was the furthest they had travelled without their families. Here, they were able to develop their own research and facilitation skills, have their voices heard and work with a panel of experts to create proposals for change.

“I had to work in group activities which I was nervous about, I became more confident within the group and started contributing to the activities we were doing including standing up in front of the group and presenting our ideas to everyone.” (Natalia)

It has been great to see the confidence of Jessika and Natalia grow, and for them to have their enthusiasm recognised. They should be really proud of themselves as they have been great ambassadors representing the Roma community!